Wendell Park School was built in 1900 and was designed by architect Thomas J. Bailey.

In those days, school was compulsory only until the age of 13 and each class had between 40-60 children... things have changed quite a bit since then! After an extension in the 1950s, the latest additions are the lovely green canopies and outdoor play areas for nursery and reception completed in 2012 by De Metz Forbes Knight.

Read about the history of the school here... 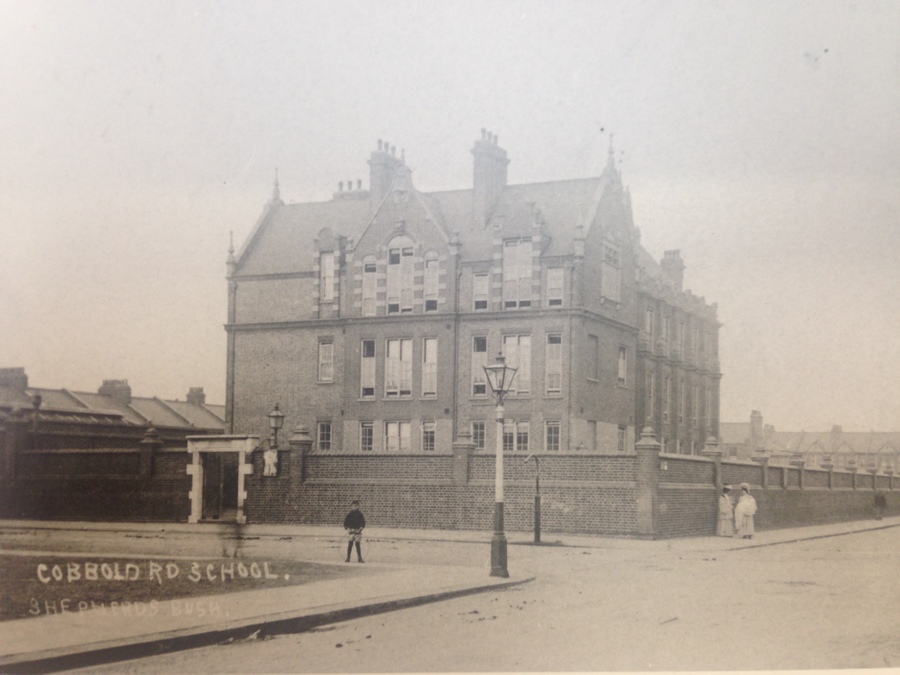 Cobbold Road School (as Wendell Park was previously known) was built in 1900, the date inscribed on the large plaque which is set into the wall on the south side of the building. It formally opened on 22 November 1901. As everyone will notice its original name was Cobbold Road School. The street was still very new and Wendell Park itself was only laid out in 1897. The name of the school was changed in 1925. On the building you will find the letters ‘SBL’ which stands for School Board for London, the elected body that was set up after the passing of the 1870 Education Act made it compulsory for all children to attend school from age five to thirteen. The Board employed their own architect to work out the best design for each school and its site. The architect for Wendell Park was Thomas J. Bailey. Many of his schools are now Listed buildings. Although Wendell Park is not Listed it is a very good example of Bailey’s work and something to be proud of.

When the school was built there was a movement in architecture called the ‘Queen Anne Style’ because it tried to copy the style of buildings from the late seventeenth century and early eighteenth century when houses were mostly built of brick, the windows were sash windows with small panes of glass and often had tall gables, because of the Dutch influence on English architecture at the time. There were also practical reasons for adopting such a style in school buildings. For example, the tall windows with many panes of glass not only gave all the rooms inside good light but were easier to repair if – as often happens – a ball or other object broke the window. A gabled roofline also allowed for more space in the top storey of the school

At Wendell Park the walls facing the playground are made of a variety of bricks. Towards the bottom where they expect to get a lot of wear and hard treatment they have a smooth finish and include the dark blue bricks known as ‘engineering’ brick because it can withstand being used in bridges, railway viaducts and factories. The other material used is terracotta. That is the light, biscuit-coloured, material made of moulded clay that is used for the ornamental parts of the school, especially in the top storeys where it is used for the finials and other features. Terracotta was better than stone because stone became dirty from pollution but terracotta could be washed clean by the rain. Other special features of Wendell Park school are the shapes of the roofs over the stairtowers and the gables which remind you of the roofs on Tudor and Jacobean houses. So even though the schools were very modern they wanted to express a sense of history. The spire in the middle of the roof held the school bell. The bell has been removed but can still be seen in the entrance hall. It was made by Gillett & Co. in Croydon, a firm which is still in business today.

There were gateways for infants and girls on Stronsa Road and boys on Kinnear Road and separate entrances into the school itself. By the Stronsa Road entrance is the caretaker’s cottage. Almost all schools had a house for their caretaker.

Inside, like most Victorian schools, the classrooms are placed around the hall, which was used for assembly and exercise. At Wendell Park, the lowest floor was for the infants. Girls were taught on the first floor and boys on the second floor. There were also science rooms and an art room on the top floor. To begin with the school had space for up to 900 children and each class contained between 40 and 60 pupils, much larger than today. Inside the walls up to about head height in the halls and passages are faced in tiles. These have been painted over now but were usually a dark brown colour and could stand up to a lot of kicking. In the staircases the walls are entirely of white or cream tiles that are not only hard wearing but helped bring light into these spaces.

The part of the school towards the east end above reception is totally different. The architect of the Victorian school had intended his building to be one long symmetrical design with the hall in the centre. Only the west part was built and that is why near the top of the wall at the east end you can see white tiles which should be inside. Only in 1951-3 was the new part added by Hugh Misty & Partners for the London County Council, whose shield is fixed to the wall of the building below the original name plaque. Much more recently, in 2011-12, the architects De Metz Forbes Knight created the new entrance and shelters in front of the Nursery and Reception classes to make better spaces for outdoor work and play and a brand new entrance for the school.

More recently, the school, with the help of the Friends of Wendell Park, have revamped the playground areas with wonderful wooden structures including outdoor kitchen and theatre, climbing areas, wild planting a gazebo and seating.